Aside: I love how many folks around here have vintage Macs that just keep on going. Brilliant.

I love how many folks around here have vintage Macs that just keep on going.

Mid-2012 MBP upon which I type this, “dead” according to the genius bar, lovingly stripped back to the motherboard and resurrected by me over many hours using a toothbrush and water to remove the spilled gin and tonic.

Sure, it’s had a few pimps – 16GB RAM, SSD+HDD internal caddy in place of the Superdrive, and I’m on my second (soon third, I expect) keyboard. Plus, Pete’s helped me out with immense knowledge regarding fixing things like the SATA cable when the machine went wonky recently. But damn, the i5 Mac still outperforms my desktop Windows 10 PC with its quad core Intel CPU and crunjo Nvidia GT Gfx card.

That’s why the newer breed of ‘throwaway’ Macs with unreplaceable/unupgradeable parts make no sense to me as a hacker and fixer-upper. I don’t throw nuthin’ away unless it’s way beyond repair (and even then I’ll harvest it for bits, just in case… and that’s saved my bacon more than once).

Aside: I love how many folks around here have vintage Macs that just keep on going. Brilliant.

Agree but I am careful with it and it is still in pretty good shape. My work colleagues have gone through 2-3 windows laptops in the same period and mine is still quieter. But its days are numbered: while there’s no hurry to update to a newer OS, it can’t go beyond Catalina (or not without tricks).

[…] many hours using a toothbrush and water […]

For all that is holy, I hope you mean isopropyl alcohol…

I’m on my second (soon third, I expect) keyboard.

This reminds me of the time I changed a MacBook Pro keyboard on a client laptop. So many tiny screws, grain of rice for scale: 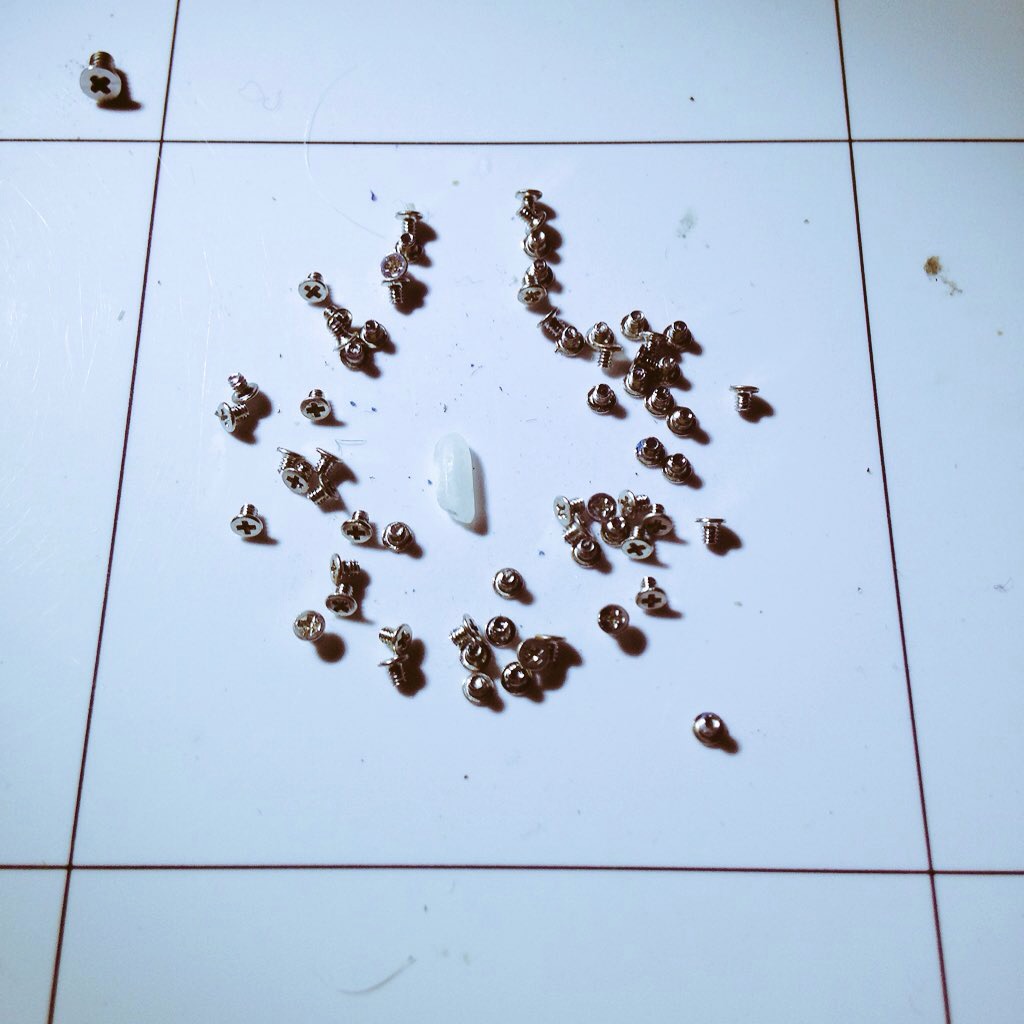 For all that is holy, I hope you mean isopropyl alcohol…

Yeah, IPA for the mobo, soapy water for the individual keys I popped off and scrubbed clean. G&T is sticky.

So many tiny screws

Ain’t that the truth! And not just one type. No, two or three different screwdriver bits required. Triangle head, star head, cross head, …

Changing/cleaning the keyboard is my least favourite maintenance job. Especially since any such intricate work is a massive cat attractant and then my carefully-laid-out array of screws so I know where they all came from is for nothing. Note to self: invest in a magnetic work board so the screws stay put in the orientation I set them out.

Note to self: invest in a magnetic work board so the screws stay put in the orientation I set them out.

Invest in and curate a magnetic board, otherwise you get this (mine, just now): 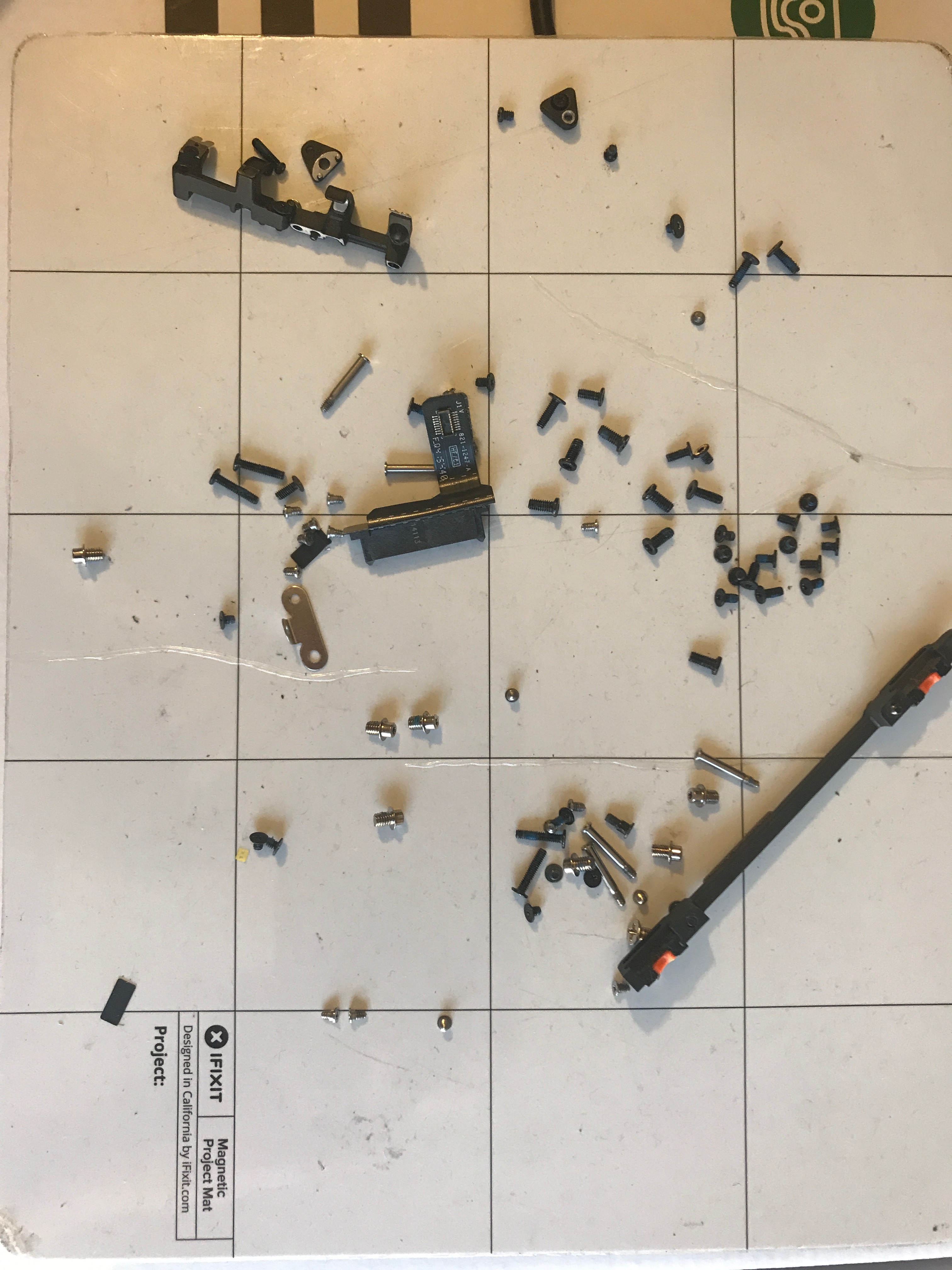 Ahem. I mean, I know what they all do…it’s just…yeah, it’s chaos.

Not seen one of those magnetic boards before. I used the lid of the small ifixit toolkit. I forgot that I also replaced the keyboard and the battery in the MBP and also had to deal with the 100 tiny screws. Taking out the existing keyboard meant disassembling the innards, peeling off the backlit foil and then literally ripping the faulty keyboard free of the aluminium body. Unfortunately a lot of the aluminium pegs didn’t pop out with it, so need removing individually with a flathead screwdriver placed on one side and a tap with a hammer. Felt very archaic taking a hammer to a piece of electronics … but it worked :-)

I’ve had that board for years, it’s showing its age now. There are many generic ones out there, back when I purchased it they were quite new and priced accordingly.