Great stuff, Pete. One thing I meant to ask ages ago: do you know why Diagnostics lists the last update time as 1970-01-01 00:00:00? Anything core can do to make this value more useful /robust in environments such as this?

I assume, and please correct me if I’m wrong as I’m using assumptions based on…I dunno…, that epoch is listed if there has been no update check since install, specifically because the time window is blocking it.

Example: if the site builds at 15:00, then the second date listed is the build time. Any check within the first hour of life (given that there’s a 1 hour limit on checking) will be bypassed, and any check at or after 16:00 would go through, and the first date in the list would be updated.

I just checked dev-demo and it says:

So, built at 12:00, and I accessed diagnostics at 14:11, which triggered a check. If I log out and log in again, then go back to diagnostics, I see the same string, presumably because the update limit is in effect.

I assume… that epoch is listed if there has been no update check since install.

Ah, yeah, that might be it. If it corrects itself after the first hour, that’s fine. I was just curious as I expected it to be the same date stamp for both dates. First being installation, second the update. Maybe that’s not what the two dates represent, I can’t recall.

First being installation, second the update.

This, but the other way around.

This, but the other way around.

Might just tweak that to omit the update stamp if it isn’t a valid date. Looks a bit daft, imo.

omit the update stamp if it isn’t a valid date.

I’ll leave the used fivers in the usual place.

:) I’ve had a go in this commit but it needs testing because I think this situation only occurs on automated installs (and I don’t quite know why). Certainly in my tests on a regular installation, $dbupdatetime was always set to some decent value every time I logged into the admin side.

Heads up: I’m fiddling with some demo server settings today. There should be zero downtime, if I do my job correctly.

If all goes well I’ll have another demo site for you to poke and prod today. More info on that later, if I do my job correctly…

File this under “running with scissors”.

There’s a new demo site for you to investigate. This is not going to be publicised from the demo server front page just yet.

First, some background information. There are multiple versions of PHP that are actively supported and/or maintained. The most recent production version of PHP is version 7.4.1, released December 2019. There are people who work on making 7.4.* better, and there are people that are working on the upcoming major version of PHP. This is known currently as PHP version 8. Assuming there’s no skipping of versions (ahem, PHP version 6), we should expect PHP 8.0.0 to arrive in 2021.

The nature of PHP development is such that it’s possible to use a pre-release, in-progress, development build of PHP version 8. And so, over the weekend, I decided to combine in-development Textpattern with in-development PHP, using the latest source code of each. 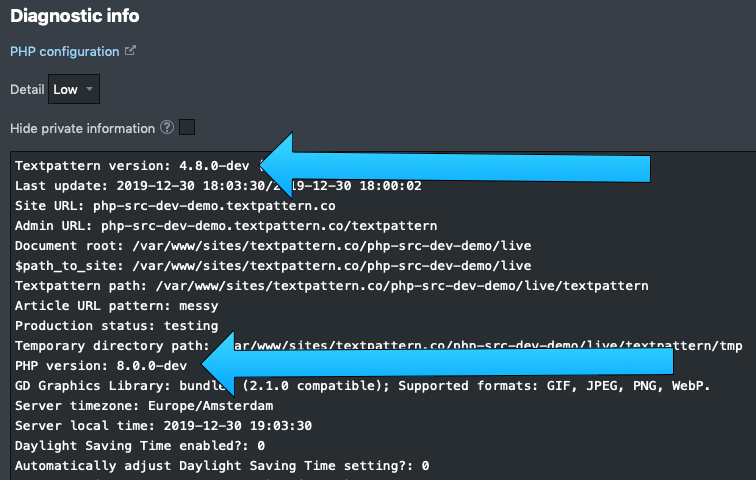 The errors relate to optional-but-missing JSON files, along with some more generic errors elsewhere.

We have at least 18 months before PHP 8.0.0 is released, I figured it would be useful for people living on the ragged edge to have a peek.

Login credentials for the other demo sites work with this site. No change there.

This demo site will refresh every 3 hours on the same schedule as the other demo sites, and when I have fresh eyes I’ll set the PHP to auto-build from source once a day.

In due course, we’ll have a method of keeping track of issues relating to upcoming PHP releases. The nature of PHP development means that changes may be introduced, Textpattern makes changes to keep up, and PHP changes something else, and Textpattern undoes something, and PHP changes something, and so on. The main benefit is better visibility, and as release versions are firmed up we can make sure there’s appropriate compatibility.

Please leave a note if something is broken, and I’ll investigate.

Edits: I’ve changed the original screenshot used it as it was confusing.

Done: demo sites have migrated back to Amsterdam from Frankfurt, DNS changes will roll out over the next 48 hours.