In our end of times, with multiple dystopian perspectives of current and future catastrophes being announced almost every day what OS will we be running our devices in the post-apocalypse? Collapse OS hopes to come to the rescue. Read about the reasons for its development here.

Yes, but, can the internet survive climate change?

I have my unpopular opinion. A complicated weave of little, but increasing, interrelated collapses in society over time before we finally get there. But we’re on track. No doubt about that.

Anyone see that report on ARTE the other night about mega-corporations like CitiCorp that now recognize fresh water is more valuable (thus profitable) than minerals and oil combined, and want to own and commercialize what’s left? Scary times ahead.

Internet access might be the least of anyone’s concerns in another ten years, but it is a factor in this energy/climate problem.

Destry, we are on the same page. It is estimated that in 2020, the internet will be surpassing the aviation industry and will become the highest CO2 polluter on the planet. This article is from 2015 but I read more recent studies which confirm the problem.

Fresh water has also been on our radar for some time now. I believe that many of the wars happening now are a result about controlling this very rare primary commodity. Here’s a depressing infographic showing the total volume of water on earth. The hardly visible smallest sphere, (over north of Florida) represents the drinking water! 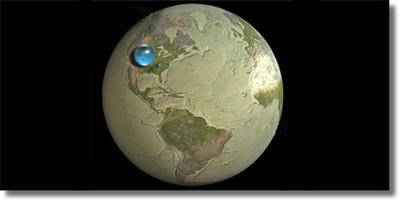 Indeed that proved to be one of the most accurate models. Even 10 years ago, many scientists believed that the problems, such as the melting of the ice-caps would start in a century or so.

Sounds like an addition to the Club of Rome 1972 report: The Limits to Growth.

In the late 20th century and early 2000’s, it was widely made fun of. Reading it now that report sounds borderline optimistic.

That emergency OS sounds a bit of fun, but I fear mostly pointless. Would we still have electricity by the 2030? Water – drinking water will be a rarity.

And situations worsen faster by the year now. Heatwaves, firestorms, droughts, ice melt, sea rise, ocean warming and acidification, loss of plant and animal life, and so on. The reports are there. I read them weekly. From major international bodies, and national too. All these things are happening at ever increasing rates that keep surprising researchers from one year to the next.

But then not so surprising, actually, when you look at the leadership of countries like the US, Australia, Brazil, etc that are choosing to facilitate these problems, not drawback from them.

Despite the increased and needed attention on these various issues and what it suggests for the future, I don’t think most of the world realizes that it’s impossible to sustain society’s current rates of consumption — for anything — let alone provide for the ‘exponential’ increases expected to come in my children’s lifetimes.

If we’re going to send the assholes to Mars, we better hurry up and do it. Funny, though, all the a-holes investing in that whole ‘space-race’ thing have no desire to actually go anywhere. I guess they’re planning to ship the paupers off.

Fresh water has also been on our radar for some time now. I believe that many of the wars happening now are a result about controlling this very rare primary commodity. Here’s a depressing infographic showing the total volume of water on earth. The hardly visible smallest sphere, (over north of Florida) represents the drinking water!

Remember the financial meltdown of the sub-prime markets which was predicted by Michael Burry as seen in the movie The Big Short?

The Big Short’s Michael Burry Is Betting on a Water Crisis: Should You?

That was a good movie.

Stocks are a sad part of the whole capitalism disaster. Water investments seem a little sick to me. If there was anything that needed to be a public commons, fresh water (and clean air) is it.

But with just 3% of the world’s water being fresh, and ill-distributed, it is what wars will be fought over soon. Already happening in many places, but it will get a lot worse, commercialized or not, and the west will be involved.

Places like Saudi Arabia have long seen the writing on the wall. They know their oil wealth won’t mean much on a desert planet, so they’ve started investing heavily in desalination projects. The problem with the technology, though, as ever, is it relies heavily on the consumption of fossil energy. Right back to square one. However, SA is also investing in solar research specifically in the direction of desalination, and they certainly have lots of direct, hot sun. These projects are extremely expensive, but a worthwhile investment if there ever was one, and SA has the money. What else are they going spend it on in a collapsed system?

Ironically, SA has always been at the bottom of the Climate Change Performance Index. Guess who beat them in 2019?. What a pair they are.

Getting back to Graham Turner’s modern analysis of the LTG and how accurate it’s proving to be; these graphs are… interesting. Especially that red population line in the third graph.

Happy holidays! Don’t consume too much.