Great to see your site finally up! And I love it!

It’s personal, quirky/idiosyncratic in its design and writing with little moments of amusement and discovery to be found everywhere. You’ve obviously had great fun chipping away at it.

Thank you for noticing the little stuff. It has taken a lot of time. A lot of mind-changing. A lot of redoing. An you know all the questions I’ve asked over the last two years. ;)

I still need to iron some things out around the properties, but in time.

It even has a little twinge of the Textpattern uncle in the sky to it.

Interesting. That’s probably because I’ve been steeped deep in research on that subject, which will become clear in due time. When you walk in the shoes of others as research, whatever the creative work, you often pick up some things for a while. Some becomes part of your own style, merging with other influences, the rest fades away.

There’s actually a short essay about that concept, style influence, in Telling True Stories. I forget which author. I have the book. I’ll have to dig that up sometime. All writers are influenced by the styles of others, even the masters. It all adds to our own amalgam, our own signature.

In any case, the about pages are somewhat on the fringe. They’re always hard for me to write. The narrative approach makes it a bit easier. I won’t be the subject in much else to come, at least not in Full Point. or at least not so directly.

But thank you, Colak, for bringing that up, because you know me. I don’t want to be in bed with Google. Maybe I can make that typography change quietly, and Potts won’t mind. ;)

Looks like we get the cake and eat it.


Actually, it was Neuton, but the brand page was out of sync. So now Goog has been booted out and the fonts are in sync.

So, I’ll just put these local and replace the GooFont calls.

That should take care of it.

Please see if that clears your test, Colak. And thanks!

As I understand that you may not want full photos:) 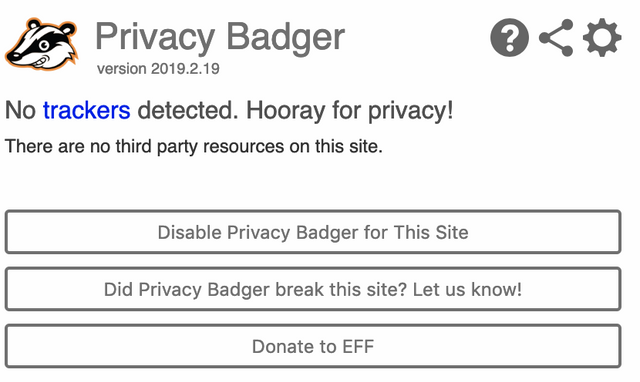 ps. the photo above is from Chrome (which also detected the tracker before). Interestingly, ff is still showing the warning.

Strange. You see it on FF. Jakob doesn’t… And I still don’t get how csf.wion.com is even relevant to Badger if your context is wion.com. They’re set up as two different origins.

Maybe there’s something in the .htaccess confusing the issue. Cross-Origin directives, maybe. I’ll check that later.

Strange. You see it on FF. Jakob doesn’t… And I still don’t get how csf.wion.com is even relevant to Badger if your context is wion.com. They’re set up as two different origins.

Maybe it is the way I have my ff setup. I heavily edited its about:config to maximise safety. Are you sure that you do not have any other apps? I think that even txp was using goofonts up to a version ago?

I don’t see anything on any of your pages that loads from anywhere else other than your domain or one of your subdomains. The “network” pane of the web inspector doesn’t show any external resources at all.

In fact your site is admirably lean. The only thing that immediately springs to mind that you could optimise are the fonts – and that’s by no means essential as once loaded they are there for all subsequent pages. Currently you have them as relatively large ttf and otf fonts. If you want to, try supplying the woff and woff2 fonts, preferably subsetted to the parts of the font you’re likely to use like the Latin characters.

This site can help for fonts that are available from google fonts but that you want to serve from your site, for example Goudy 1911, Neuton, Share and Share Tech.
You can choose the weights you need and the charset subset as well as the level of support you want and it gives you a download as well as the css font-face code for it. For “HkGrotesk” you can use FontSquirrel’s webfont generator or look here from some that have already been converted.

Maybe it is the way I have my ff setup.

the photo above is from Chrome (which also detected the tracker before). Interestingly, ff is still showing the warning.

Might you perhaps have another extension of something in firefox that is loaded alongside Destry’s site and makes use of google fonts? If you don’t have that extension with Chrome, that might explain the difference.

I think that even txp was using goofonts up to a version ago?

Yes, and Phil switched to serving the relevant fonts locally.

Might you perhaps have another extension of something in firefox that is loaded alongside Destry’s site and makes use of google fonts? If you don’t have that extension with Chrome, that might explain the difference.

Hi Julian,
Wouldn’t this be returning false positive results in other sites? I am investigating it though as this is some very strange behaviour.

you could optimise are the fonts . . . try supplying the woff and woff2 fonts

Thanks for that tip. I didn’t know those fonts were available like that. I tracked them down from free sources, but the packages I found didn’t contain the woff options.

Is it necessary to use both woff and woff2? I notice if I employ both, their combined size is larger than just the single ttf files I had before in each case. But if it’s just one or the other, then those would save about ~30-40 KB in each case.

I have to use Alegreya italic as an italic for Goudy because Goudy doesn’t come in italic. ;) It works pretty good. I just set the i and em elements to it, and whatever other slants I need.

Some day I’ll be able to buy Livory, my absolute favourite typeface in the world. I just love it. I had it via TypeKit for years, paying for that stupid service for years, while my site was offline for years. Somebody punch me in the face.

In the meantime, the Goudy/Alegreya tag team is okay. No Livory, though. :{

For modern browsers WOFF and WOFF2 suffice, and only one will be used depending on which is supported. You can see the level of support for WOFF and WOFF2 on caniuse.com.