According to Datanyze Textpattern has a marketshare of less than 0.01 percent and ranks in the 94th position.

That link currently says ~2.7 million sites and 70% market share for Wordpress. Both of these are inaccurate. Wordpress powers about a third of the web in total, about two thirds of the web where there’s a recognisable CMS, and there are wild estimates as to how many websites there are overall across all server and languages and whatever…over 1 billion? Over 2 billion by now? Who knows!

Short of us forcing the header response or meta generator tag to declare Textpattern is powering the website (which we would never do, as we believe in the security and privacy of our users), there is no way to reliably find out how many sites are powered by Textpattern. But my own estimates put it at around 10,000.

We can gauge some usage via download stats from the main Textpattern.com site. FYI 4.8.0 (which released 25th February 2020) has had 1,849 downloads as of today, so that’s over 600 downloads a month – not too shabby. However, this still doesn’t give much reliable info as:

Anyway, as previously mentioned in this thread, as long as we are still here and making a product that people still use and like, that is good enough in my opinion. Obviously, the more people that discover our lovely CMS the better (and I fully encourage anyone to promote the CMS to others as much as they can). I don’t really use Textpattern very much at all in my paid day job these days (my job role has evolved over the years), but I still like to develop it as much as time allows – and I like the community that has built up around it – so I won’t be leaving anytime soon (if ever).

Many CMSes have come along – and indeed gone – in the time Textpattern has been here, so its staying power is quite remarkable I think. And the current devs are the most approachable and enthusiastic we have ever had, in my biased opinion. 😀

One thing I do notice in the web dev community is a lot of people seem to jump on the next ‘shiny new thing’, just because it’s new and they want to be seen as cutting-edge or progressive. Sometimes those technologies stay but a lot of the time they don’t. And a fair bit of the time the technology is actually worse than what came before it.

Short of us forcing the header response or meta generator tag to declare Textpattern is powering the website (which we would never do, as we believe in the security and privacy of our users) […]

We sort of do this at the moment if you include feed syndication, so I opened github.com/textpattern/textpattern/issues/1488 for consideration.

Often I observe such actions: 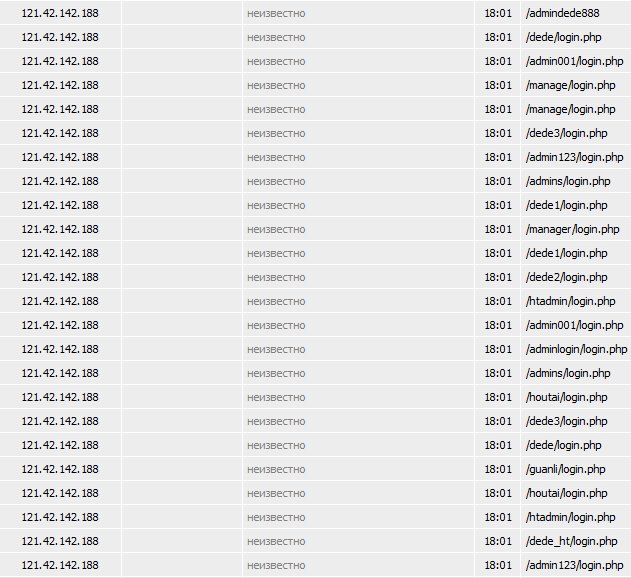 It is better not to give hints to crackers.

@singaz. I see that all the time in my daily logs, too. Script kiddies gonna hack low hanging fruit, regardless of whether you advertise what system you’re running or not.

Virtually nobody tests what you’re running first to target exploits. It wastes processor cycles. Fire and forget is the name of the game. I estimate 70% of the exploits people try against my site start with /admin (WordPress) or are attempts to fashion DB queries that target Magento loopholes. I’ve never run either on my systems, ever.

If I added generator="WordPress" or generator="Galactic Badger" to all my Txp sites, I’d get the same bad traffic hackers.

Often I observe such actions…

Colak, … that is some huge htaccess file you are running there.

Colak, … that is some huge htaccess file you are running there.

Our site was relentlessly attacked. Two times using DDoS. I am also I am trying to redirect old versions and urls, of the site in order to reduce the 404s.

I imagine your web server is either honed, muscular or quietly weeping!